Many Wharton MBAs try something new during their two years at Wharton. Cindy Dexin Liu started a school, and the Semester in San Francisco helped make it possible.

Cindy graduated in 2018 with an MBA in Entrepreneurial Management from the Wharton School and a Master’s in Education Entrepreneurship from Penn GSE as part of a new dual-degree program she helped establish. She began working on a school design as part of her education capstone project, using the resources of Wharton and Penn — including a Semester in San Francisco — helped her make her project into a reality. Under the leadership of Cindy’s partner, Jingjing Xu, the new K-8 school, Imagination Lab School will enroll its first students in Palo Alto in fall 2018.

“I definitely expected to open a school someday,” Cindy said. “But in a two-year, three-year, or even five-year timeline.The opportunities I came across in the Bay Area really accelerated my plan, and being able to co-found a school with someone who is experienced and resourceful has been rewarding and meaningful to me. It’s taking off at a speed that I didn’t imagine.”

The Path to Penn

The daughter of entrepreneurs, Cindy grew up in Nanjing, China, where she was involved in both business and educational nonprofits from an early age. It was her experience in nonprofits that taught her the importance of business acumen. “I found that charity, no matter which country we’re talking about, is very, very inefficient,” she said. “I think it’s really important to figure out a way to do sustainable charity, to do things more efficiently.”

While attending the University of California, Berkeley as an undergraduate, Cindy started the Spring Foundation, a nonprofit organization focused on fundraising and designing summer educational programs for underprivileged orphans back home in China.

“That organization solidified my passion for not only social impact, but actually narrowed my interest down to education,” she said. “I realized education is the lever for any individual to transform their life.”

After college, Cindy took a turn at consulting with Bain in Shanghai, but she kept sight of her passion.

“I knew that all the detours I was taking would help me do social impact and education a lot better,” she said. “As soon as I kicked off this process, going to the Education Entrepreneurship program, I knew it was the right time for me to use all the toolkits I collected in the past years and directly use them to build upon my dream, which is education.” 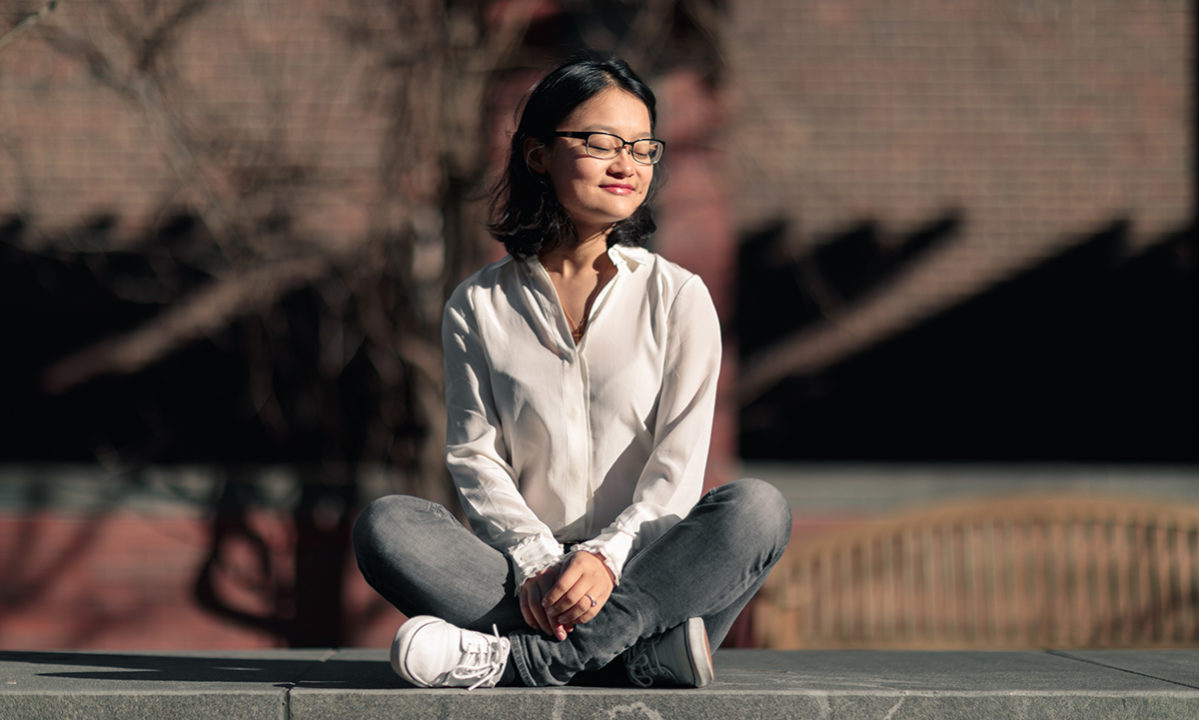 Because Cindy considers the San Francisco Bay area her homebase in the U.S., when she enrolled at Wharton she knew she wanted to participate in the Semester in San Francisco. At the same time, she’d discovered and been admitted to the MSEd in Education Entrepreneurship program at Penn’s Philadelphia campus. Fortunately, the two schedules didn’t conflict.

Because the MSEd program has an executive-style schedule, Cindy was able to fully participate in Wharton classes, community, and networks in San Francisco, returning to Philadelphia for education classes once a month. Read more about how Cindy benefited from the dual degree MBA/MSEd program.

“The structure worked out perfectly,” she said. “It allowed me to be away when I need to and just come back every month to Philadelphia for class. A lot of my classmates fly in from London, Dubai, Vietnam, China, all parts of the world. Flying from West Coast to East Coast is nothing compared to them.”

At the same time, she was able to concentrate on her classes and school when she among the smaller San Francisco Wharton cohort.

“Being in San Francisco allows you to internalize a lot of things,” she said. “But at the same time, the Semester in San Francisco is a very cohesive community like a family. I also spent a lot of time just being with them and hanging out with them. A lot of really important thought partners I had for my project are from my cohort in San Francisco. I very actively and very frequently brainstorm with several specific classmates and they give me very valuable suggestions along the way.”

The Wharton Semester in San Francisco location was the perfect homebase for researching her capstone as well.

“The flexible class schedule allowed me to do a lot of outreach and networking,” Cindy said. “I initiated a round of more than 10 to 15 school visits around the nation. I visited the most innovative independent schools in the United States. I observed the classrooms, talked to school founders, and had very in-depth research into those schools. And that research actually set a really strong foundation for my own school design. The Semester in San Francisco totally enabled me to do the whole thing,” she said. “I wouldn’t even know my co-founder if not for that program.”

The Semester in San Francisco was the right place at the right time for Cindy to turn her capstone into a real school. When Altschool, a tech-backed Bay Area experimental school in Palo Alto, announced that it was closing, an opening was created in the local educational space. Cindy worked with her partner Jingjing Xu,  CEO of ETU US, to fill the gap for the students, parents, and teachers who were displaced.

“I jumped right on the project, trying to accelerate my school, and acquire as many educators and families from that school as possible to see if we can use the legacy, the curriculum, and the spirit in our new school,” she said. “We were able to fundraise for seven figures from different strategic partners, and we did a lot of structuring of the school — building a team, finding a space, a lot of nitty gritty, small decisions.”

The resulting school, Imagination Lab School, is part of the Global ETU family, a nonprofit K-8 school led by Altschool’s founding head of school. The curriculum incorporates a personalized, project-based learning experience and a global perspective with summer international exchanges for students and teachers. “A lot of our strategic partners are outside of the United States so we’re able to expose the students to global opportunities even at the very beginning of our school,” she said. “My partner has a lot of connections both in Palo Alto and in other parts of the world, including China.”

Although Cindy’s school is scheduled to open in the fall, after graduation she’s pursuing another path.

“I actually decided with my team that I will only be active during the start-up phase, and I will remain as a resource and volunteer afterward,” she said. Cindy has ambitious plans to transform education, and her experiences have taught her that she has more to learn in order to make the biggest impact. She decided to join a 7-year-old charter school in California, Yu Ming Charter School, as its Director of Operations and Strategy.

“I want to see great school models duplicated and scaled in other parts of the world,” she said. “So I really believe that we have to figure out what education works best, whatever it takes. Then we can think about out how to lower the cost, scale it, and then to democratize it to other kinds of communities around the world.” 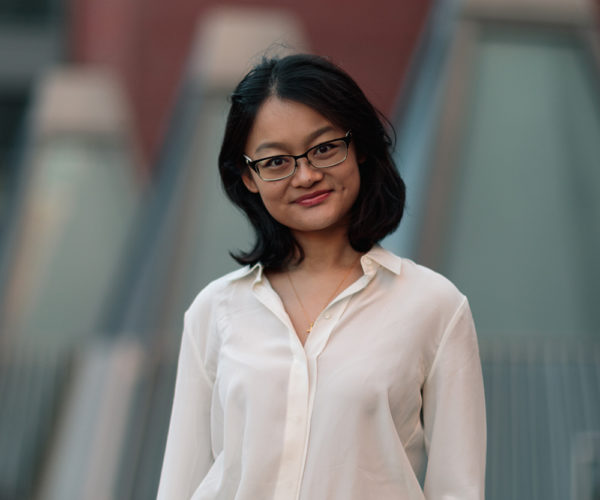 Why Cindy Cares About Education Entrepreneurship

During Cindy’s undergraduate years at the University of California, she founded the Spring Foundation, a nonprofit that organized summer programs for orphans in China. During that time, she became close to a girl in the program, and they stayed in close touch even while Cindy became a Bain consultant in Shanghai. But when Cindy traveled to the girl’s city for a project, she visited her young friend and found out that the little girl had dropped out of school.

“I had been calling her throughout the time and she didn’t tell me she’d left school,” Cindy said. Her grandparents said the girl had been sick for several months. When she finally recovered, she was so far behind, she couldn’t go back to school.

“I talked to her for three hours trying to figure out why,” Cindy said. “She told me that she was so afraid that she could not catch up. She had already lost her parents. She had lost everything, and could not afford losing the image she created in front of other people.”

With just two days before Cindy had to return to work, she spent it trying to convince her friend to go back to school. The girl promised she would. But when Cindy called her grandparents a few days later, she found out that the little girl had walked to school, stood at the gate, and walked back home.

“I just realized how the school system ignored this one individual’s need to be recognized and supported when she really needed it — how insecure the school environment must be. I know that I want to create a school where every child can run to, no matter how their performance is, where they have creative confidence in themselves that they can catch up, where they can be comfortable being themselves.”