Warby Parker co-CEO and co-founder Neil Blumenthal, WG’10, returned to Wharton Pre-Term for a conversation with Prof. Stephanie Creary about how to build diversity and inclusion.

“When we do diversity right, we can be innovative and creative and do great things,” said Prof. Stephanie J. Creary from the stage of Penn’s Annenberg center before an audience of first-year MBA students. The assistant professor of management was introducing Neil Blumenthal, WG’10, the co-founder and co-CEO of eyewear disrupter Warby Parker, for a discussion on his experiences creating and leading an inclusive organization.

The August 15 keynote conversation was a new development at this year’s Wharton’s MBA Pre-Term — the intense immersion that introduces first-year students to their learning teams, Advising Support Network, and the Wharton community. Creary and Blumenthal spoke at an evening event that officially capped off Pre-Term and preceded their first MBA class, Management 610: Foundations of Teamwork and Leadership.

Organized by the MBA Program Office and the McNulty Leadership Program, the event promoted inclusion in Wharton’s 862-person MBA class, which includes students from 80 countries across the globe.

“Economics and people aren’t antagonistic,” said Creary. “It’s not about justice or innovation, but justice and innovation. How can we create organizations where these two values exist together?”

Blumenthal, who founded Warby Parker at Wharton with MBA classmates Andrew Hunt, David Gilboa, and Jeffrey Raider, shared his insights on how they built their innovative company from a Venture Initiation Program startup to an industry disrupter with its own manufacturing lab and retail shops. 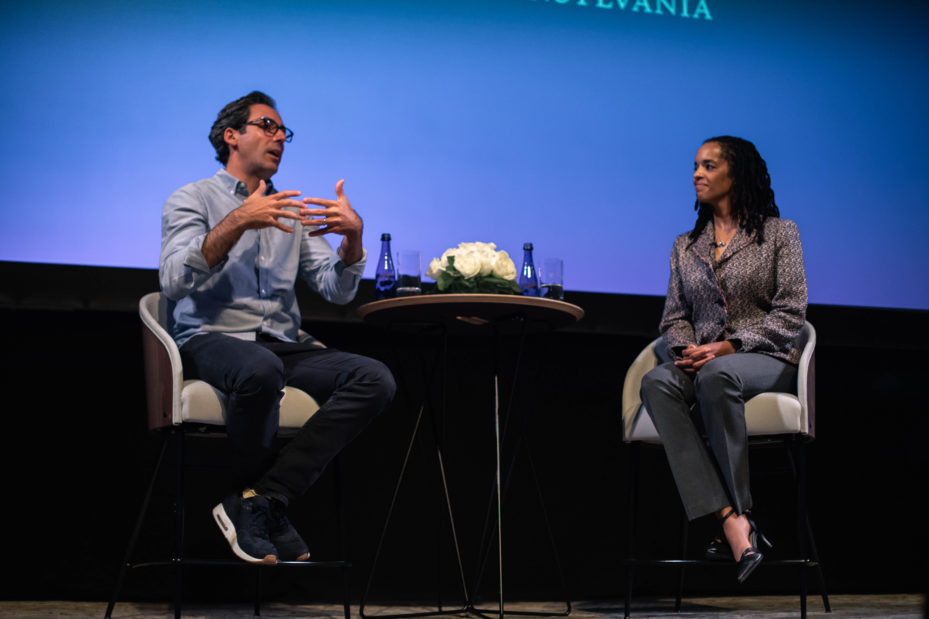 Here are some takeaways from Blumenthal’s remarks.

Create a place for discussion and belonging.

“We’re trying to create a vocabulary and nomenclature so that we can have open and honest discussions throughout the company with 1,500 people,” he said. “We look through a few different lenses, no pun intended. If we want to have a positive impact on our employees, we need to create an environment where people can bring their whole selves to work and reach their full potential. We want them to be excited to walk through the door and feel like they belong.”

Listen to other perspectives to create policies that are inclusive.

“There are a million decisions you can make every day that can make a place more inclusive,” Blumenthal said. “For example, hours can be quite long at an early-stage company. At one time we were having early meetings at 8:30 before our 800 number opened at 9 a.m. It seemed to make sense until one of our employees told us that as a mother, it was incredibly difficult for her to drop off her son at school and get to work for a meeting by 8:30. It created a burden.”

While he hadn’t considered that perspective, his team changed the meeting time to be more inclusive to parents.

“We remove names from resumes to evaluate based on experience,” said Blumenthal. “We have paid internships because we don’t want to create economic barriers when you don’t get paid. We have a transparent applicant process using data and feedback tools to evaluate. We think a lot about position descriptions and how we advertise them. If we want a diverse tech force, we have to think about how we recruit.”

Blumenthal gave an example of how often he was given referrals to interns from friends, colleagues, and investors, many of whom share his demographic background. With limited internship slots to fill, he could fill them all by referral, but to find diverse voices, companies have to recruit beyond their own networks.

Break down silos to create innovation.

“We try to take learnings from different areas of the company and apply them across. There are very few companies that have a tech team, eyewear design, brand design, digital design, store design — all these different functional areas,” said Blumenthal.

“Early on we would have hackathons and only our software engineers would participate. Now we have hackathons across the company. You can form a team without an engineer. You need to create a prototype, but that prototype could just be scribbled on a piece of paper or screenshots.”

“Ideas don’t form in isolation. They form from people with different viewpoints,” he said.

Inclusion in one area leads to innovation in others.

Warby Parker began its diversity and inclusion program after realizing that some transgender employees were being misgendered in their administrative system. By changing their system to be more inclusive to transgender employees, they gained perspective that helped them understand customers.

Blumenthal recalled one hackathon project conducted by two transgender employees. “They examined how we applied gender identity to frames,” he said. “On our website, you can shop for men or women based on consumer research preferences, and our data model in retail shops tagged gender to purchases.”

The transgender employees pointed out flaws in gender tagging, and Warby Parker added additional gender responses to improve both customer and employee experience.

Start the conversation to start change.

“Conversations can only happen when everyone is around the table,” said Blumenthal. “You will have similarities with people that you don’t see on the surface. Right now we’re not going to have change happen through our political system, but where it can happen is through the private sector. We can create the change we want to see in the world, and then we’ll figure out how to get it in the political system.” 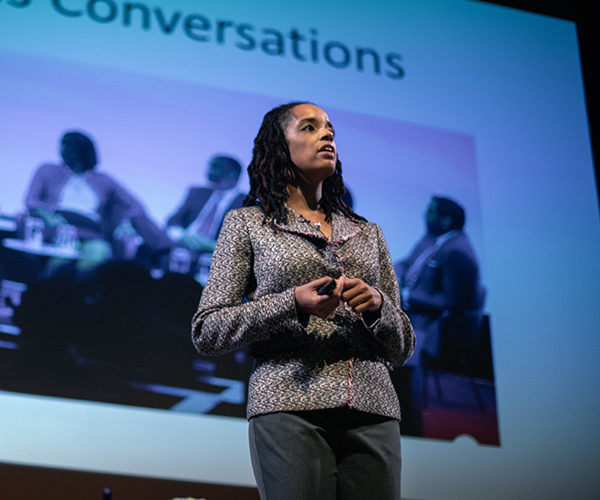 Prof. Stephanie Creary invited MBA students to take her seven-week Leading Diversity in Organizations elective, which returns for a second year. She emphasizes that belonging and inclusion are the goal of diversity programs.

“Three of the things I’ve learned is that voice, belonging, and respect are core elements of inclusion,” she said.