Here are five tips they shared for those looking to succeed in a startup competition:

While the first submission deadline was November 5, the Cellview Sciences team recommends starting at least a month in advance. “Starting in September gave us just enough time to meet the deadline,” Henry said.

Cellview finalized their team at the end of September. “In reality, it’s probably best to assemble your team as early as possible. There’s really no such thing as having too much time on your hands for these sorts of projects,” Michael said.

2. Make efficient use of your time

With demanding class and extracurricular schedules, it can be difficult to find time to meet up. Here, it’s all about constant communication and steadfast commitment.

“The bottom line is that if you care about the project, you’ll make time. It’s all about priorities. You need to meet at least once a week for something like this to succeed. No shortcuts here,” Michael said.

“The most important thing that has helped us so far is understanding and respecting each other’s existing commitments. We do our best to be flexible and accommodating when scheduling meeting times,” Ellen added.

That might mean working some off hours. “We were often in Huntsman at really weird times of the day, like 6:30 a.m. or 1:00 a.m., just to make the scheduling work,” Henry said.

And when they found the time, they made the most of it. “Stay as productive as possible during meetings: no down time, hit the important things, be concise,” Henry added

3. Start with an idea, then look at market feasibility

Getting started with brainstorming can seem like a daunting task. The Cellview team focused on technology first then following up with market research. Their interdisciplinary team allocated tasks based on each member’s expertise.

“For idea generation, we would throw around potential areas in which the technology we were trying to monetize could be useful,” Michael explained. “For each area, Henry, who is our science/technical expert, would think of ways to use the technology to improve specific procedures/protocols that are currently in use. After proposing a potential solution, Ellen and I, who have business backgrounds, would do market research to see if the idea could potentially make a viable venture and if so, how big it could be.”

After going through this process four or five times, they settled on preimplantation genetic testing (PGT) for in vitro fertilization.

“Our process was sort of a mixture of both technology-based brainstorming and following up with cursory market research. We decided to run with our ultimate idea, Chromosense, because it combines both technological innovation and market feasibility,” Henry said.

4. Be bold and prepared when reaching out to potential partners and advisors

Cellview took advantage of resources and expertise across Penn’s 12 schools. Henry, who is studying biochemistry, was able to get advice from his academic mentors, Prof. Elizabeth Rhoades, associate professor of chemistry, and Prof. Greg Bashaw, professor of neuroscience.

When it comes to reaching out to people and firms outside of the University, introductions go a long way. “It’s a mix of cold emails and leveraging our personal networks. People at Penn were much more receptive to cold emails, while partners in industry usually required an introduction to get anywhere,” Michael said.

One tip from Henry: Just ask.

“As cliche as it sounds, I think that future teams will be pleasantly surprised to realize how eager people often are to help, especially since we are still students,” he said. “However, it’s important to be well prepared and intimately familiar with the details of your proposal.”

The team said their main clinical collaborator, Main Line Fertility, has been amazingly supportive of their venture. After several emails and a conference call, they decided to collaborate on Chromosense. They worked extensively with Dr. Sharon Anderson, the lab director at Main Line Fertility, to refine and validate their technology.

5. Get to know your teammates and develop trust

“The level of trust and respect that we were able to build definitely carried us a long way,” Ellen said. “We respected each other’s conflicts, but made sure that once we were all in a room together that we were focused on getting the job done.” While they prioritized the work, they also made time to grab food and drinks together to catch up on other aspects of their lives.

Their shared excitement and passion for their work helped them to develop a strong bond, and their friendship made it easier for them to develop trust in each other’s expertise. “We’ve been friends since we lived on the fifth floor of English House our freshman year,” Henry said. “Not everything is perfect. Especially when the going got tough days before the final pitch, team spirit definitely took a dip. But we were able to work through the most difficult parts by supporting one another.” 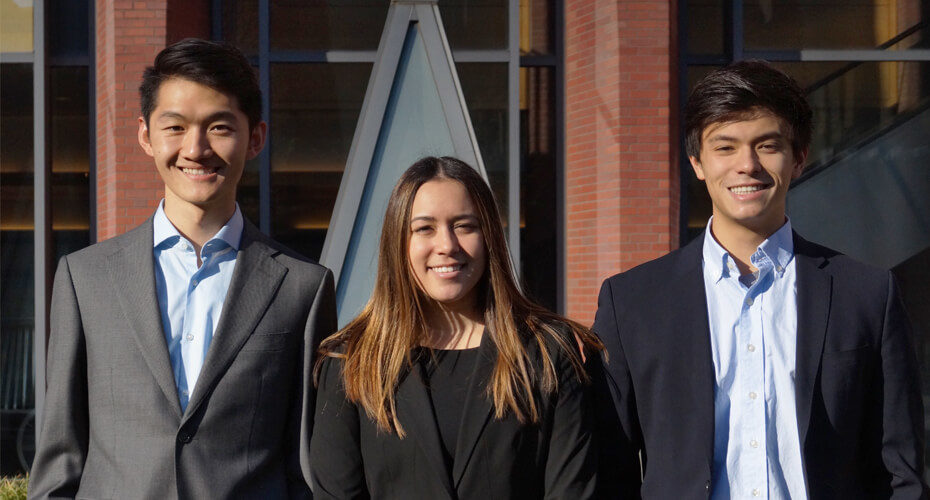 A Brief History of the Y-Prize
The Y-Prize is often likened to an inverted version of the more famous XPRIZE. Three Penn professors, Vijay Kumar, Mark Yim, and David Hsu came up with the idea for the entrepreneurship innovation competition.

What started out as an in-class competition for Prof. Hsu’s Entrepreneurship course was launched into a School-wide competition with help from the Mack Institute for Innovation Management and the Weiss Tech House. A number of other sponsors now support the Y-Prize, including The School of Engineering and Applied Science, Penn Wharton Entrepreneurship, the Penn Center for Innovation, and the IP Group.

The Competition
The technologies used for the Y-Prize competition have been developed by Penn faculty but do not yet have a commercial purpose. Participating teams, which all need to include at least one Penn student, have to come up with commercial applications and submit their pitch. The winning team receives $10,000 to make proposal a reality.